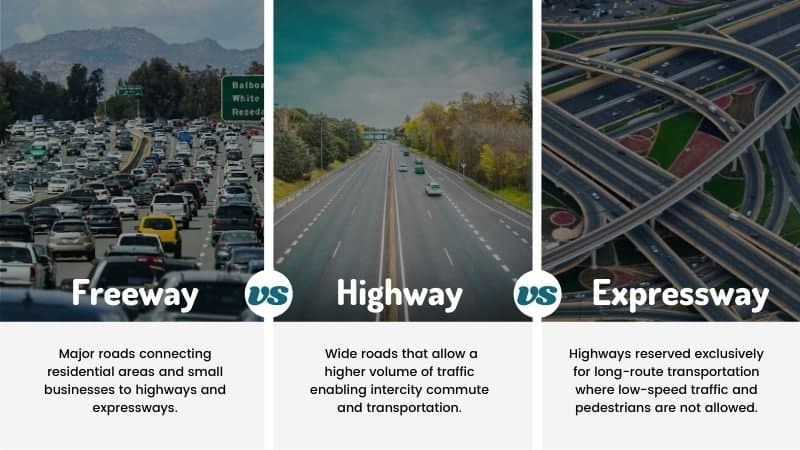 Although all freeways are highways, not all highways are freeways. The primary distinction is between a freeway and a highway. A freeway is a route that is constructed solely for high-speed road transport, with all flow of traffic and ingress/egress controlled and monitored. A highway is a direct or indirect road or some public way on a territory that is open to the public.

An expressway is a multi-lane route that enables heavier traffic flows faster, however, there are more precise classifications for expressways in various places. Without sufficient or full understanding of the causes behind different traffic rules, they are likely to be misused. Roads are available in a number of different forms, as well as for a variety of purposes.

A highway is a roadway that links two points, allowing transportation and goods to move between them. Any direct or indirect road or other open paths on the territory is referred to as a highway. It can be used for main roadways, as well as other public highways and paths: it is not a synonym for controlled-access highway or a replacement for open road, autoroute, or other similar terms. Highways may or may not block specific transport routes, and they may or may not be subject to tolls. The toll is just a booth where automotive fees are taken for highway road development or services. Tolls are frequently collected in toll booths, toll posts, and toll hubs.

Freeways are mainly located in heavily populated regions and large cities. A freeway is a road with a lot of traffic, fast-moving of vehicles approved, and greater visibility. It is a prominent road with multiple lanes. Freeways are especially for long route traffic moving at a high speed. It is a significant highway that is free of tolls. Highways having two or more lanes on either side are known as freeways. Interstate highways are sometimes found on freeways.

An expressway is a broad route designed for high-speed traffic. Multiple designated lanes, including a commercial lane, are present on the expressway. The expressway's function is to enable smooth traffic flow by allocating lanes for vehicles approaching crossroads.

Here are some merits & characteristics of an expressway and driving on it. Let’s check them out -

Highways, freeways, and expressways are all public roads that serve as key transportation routes. Although they offer the same goal, road users must contend with the distinctions between highways and freeways.

The primary distinction between highways, freeways, and expressways would be the kind of vehicles and pedestrians that are permitted to use them. Pedestrians, bikes, motorbikes, and non-powered transportation are typically not permitted to use a freeway or expressway but they are not restricted from entering highways and freeways.

Freeways, as we all know, are limited-access highways. Vehicles can only access a freeway or expressway through on-ramps or crossings at specific points. A few traffic laws or interchanges connect the expressway to residential roadways. On the other hand, there are no entry ramps or interchanges on highways.

A median separates the traffic flowing in both ways on the freeway. It could be a lawn median, a cement divider, or some other kind of partition. On the other hand, there may or not be a median separating traffic traveling in different ways on highways and expressways.

Highways usually have only two to three lanes whereas expressways can have up to eight lanes. On the other hand, the number of minimum lanes on freeways are four and they can accommodate a maximum of six lanes.

In many nations, freeways have speed limits of 70 to 80 miles per hour. On average, the maximum speed for vehicles on expressways is 120 km/h, while the maximum speed on highways is around 55 to 70 mph and which is between 105 and 113 km/h.

Another distinction between a freeway, an expressway, and a highway is that on a freeway, you cannot travel below a specific speed limit which is 55 to 65 miles per hour. To improve road safety, several countries implement differing minimum speed limits. Highways and expressways, on the other hand, are a mix of moderate and fast-moving cars and the minimum speed limit is between 40-60 miles per hour. As a result, you can take the highway and expressway at a moderate pace. However, due to the high volume of the number of vehicles, you cannot drive slowly on the freeway.

On the highway, there are many traffic signals, crossroads, railroad crossings, road network crossing points, and pedestrian crossings. Because of interchanges, there is no cross-traffic on expressways. Freeways, on the other hand, are always devoid of traffic signals, with no traffic, railway, or crosswalks to keep a stable flow of traffic.

Finally, drivers would only depart a freeway or expressway at designated off-ramps or exit interchanges. The highway, on the other hand, has no exit junctions. Any local crossing can be used to leave highways.

Here is an example of Highway, Freeway, and Expressway that would enhance your understanding of the terms more precisely. In his profession as a driver, Mike travels through different ways and roads on a regular basis. He is running a business as well that requires a transition of goods and products. Mishra uses highways when he goes out of the city for business purposes. On the other hand, for regular purposes, he uses freeways or expressways that don't require any tolls, fees and traffic signals enabling faster commute.

Unique Selling Proposition (USP) vs. Brand Persona: Is There A Difference?A distinguishing element or quality that separates a business
Memoir vs. Autobiography: What's the Difference?A memoir is the account of a human's life that an individual
Buyer Persona vs. Ideal Customer Profile (ICP): What is the difference?A buyer persona is a description of the desired audience based
Income Statement vs. Balance Sheet: Learn the DifferenceFinancial information comes in various formats, but the balance
How To Organize A Business Plan For A Small Online Business?The progress of your company is dependent on the quality of the
Business Ideas Popular Among Women EntrepreneursLet's discuss the top business ideas. Women in business